What happens when fossil fuels run out? How do communities and cultures survive?

After Coal: Stories of Survival from Appalachia and Wales tells the story of four decades of exchange between two mining communities. The book compares the history of two coalfields on the opposite sides of the Atlantic and profiles individuals and organizations that are building a new future in former mining communities. From these local stories, readers will deepen their understanding of global principles of community regeneration. Read the book review from Publishers Weekly 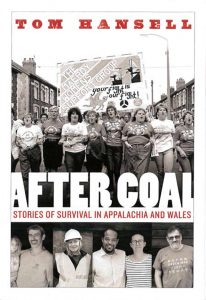 Central Appalachia and south Wales were built to extract coal, and both regions have experienced economic depression, labor unrest, and outmigration. Wales lost 20,000 coal jobs between 1980 and 1990, and central Appalachia lost a similar number of coal jobs between 1994 and 2014. After Coal focuses on coalfield residents who did not join the out-migration, but chose to remain in their communities to build a diverse and sustainable economy.

Filmmaker Tom Hansell spent five years recording interviews and location footage in the mountains of eastern Kentucky and the valleys of South Wales for this project, which included a documentary film, and a face-to-face exchange between coalfield residents from Appalachia and Wales.

The stories in this book are told through interviews and photographs collected during production of the After Coal documentary. Readers experience eyewitness accounts of coal booms, bitter strikes, the loss of livelihoods, as well as the strong bonds that have inspired residents to keep their communities alive after the industry that built their towns collapsed.

To purchase the After Coal book, please visit the following links: